Your Right to a Good Brew

An excerpt from the Declaration of Independence declares it our right and our duty to address government abuses. Yesterday, patriots exercised their Constitutional right to peaceably assemble to redress our grievances. Tea parties were held across the nation since it is our right to have a good brew! NYC was no exception.

Teaparty365 is the local NYC tea party and was the organizer for this event. I have their link included on my blog list. If you are not in NYC, you can also find a tea party near you by going to the Tea Party Patriots website.

NYC is a big place. So in order to get more visibility and bring attention to the issues, Teaparty365 organized the first anniversary tea party event with three stops. They also had literature with key points available to hand out. We hope this educates people on the facts, rather than what the MSM reports and wants you to believe.

We started off the day with our first stop at City Hall. Despite having a blizzard the prior day with 2 feet of snow, we had a good sized crowd. I estimate there were about 60 people there, but some people came to each location, so it may be more. There were some tourists as well as locals passing through City Hall Park, but I think it was less than normal due to the weather.

After about an hour, as a group we took the subway uptown to our second stop, Senator Gillibrand's office in midtown on Third Avenue. Midtown has a lot more traffic and people walking around which we used to our advantage. The crowd was now more energized, and shouted some good chants, such as "listen to the voters or we will vote you out" and "hands off healthcare".

After another hour, we walked one block to Senator Schumers's office. Conveniently, his office is right in front of a bus stop. The tea partiers took advantage of this too by waving our signs and chanting things like "chuck, Chuck" and "Schumer's gotta go".

We certainly drew attention to ourselves and our cause. Of course, there are some that shake their heads and laugh, for which no facts presented will ever be acknowledged. However, there were others that looked at our signs and listened. Some even joined us and a few stopped to ask questions.

Of course, a rally wouldn't be complete without NYC cops. They did stop to see what we were doing. They spoke to Kellen to ask if we needed any security. Being that tea partiers are a peaceful crowd, not the angry mob as implied by the likes of Pelosi, we did not need any police assistance. They joked with me that I looked dangerous, to which I informed them that yes, I was dangerous because I believe in the US Constitution. They laughed, pulled away, and parked their cruiser across the street, just in case, and stayed there until we left.

We stayed in front of Schumer's office for an hour. By then, we had all worked up a good appetite. To quote David Webb, "we stimulated the economy by heading to O'Neil's for lunch". Lunch with our fellow tea party patriots, some old friends, some new, was a great way to end the rally. Cheers to a good brew!

Below are some pictures from our event.

Old Glory and the Gadsden Flag lead the way. 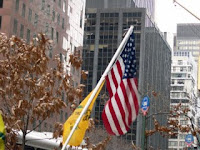 The Co-Directors of Teaparty365 gave brief speeches and thanked us for coming. 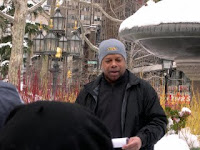 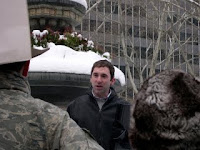 A close up of some of the crowd. 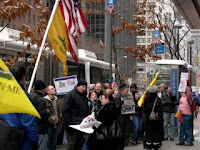 The crowd stretched all down Third Avenue since we are not allowed to block the sidewalks. 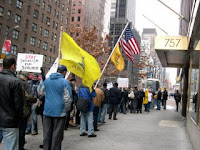 Some of the tea partiers were wearing some great buttons.

Here is a sampling of some of the signs.

This sign had a list of a sampling of taxes that we pay. I know you can't see the details so well, but this tea partier is making a valid point at how we are taxed enough already in everything we do. 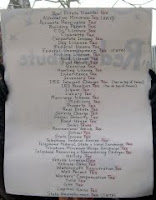 Other tea partiers had some creative signs with great messages. 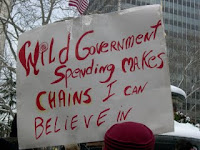 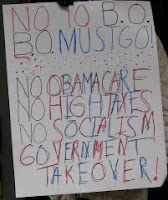 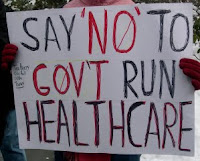 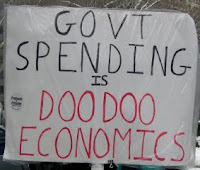 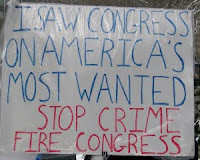