To quote the Declaration of Independence:

"But when a long train of abuses and usurpations, pursuing invariably the same Object evinces a design to reduce them under absolute Despotism, it is their right, it is their duty, to throw off such Government, and to provide new Guards for their future security."

This was result of the colonists rising up, realizing it was necessary to do so, and would be necessary from time to time. Three years prior to the Declaration, the people did just that. On December 16, 1773, about 50 colonists held the Boston Tea Party. A small group, but upon reflection, not insignificant, proving a few can accomplish a lot.

We all know that America's first tea party stemmed from brewing resentment "boiling over". Last year, just 236 years later, the "second" tea party was held, spurred on by the increased government spending, the bailouts, and the stimulus. The people knew they would have to pay for this eventually, so the modern "TEA" party was not only symbolic to our history, but served as an acronym for "taxed enough already". I think most people will agree, that resentment was brewing amongst we the people for quite some time, but the government finally went too far.

The government of course was caught off guard, otherwise they wouldn't have gone too far in the first place. They thought the people were complacent, and maybe there is truth in that. Because of it, they never expected the people to rise up. They thought it was a small passing inconvenience. So they reacted and it wasn't good. They tried to dismiss the uprising. Of course, the MSM jumped on the bandwagon with the government. Collectively, they called the tea partiers names such as Nazi's, dissenters, unpatriotic, AstroTurf, a threat to national security, and a demeaning label of "teabaggers" which is apparently a sexual slur. They insulted those who finally stood up to declare they'd had enough, who wanted the Republic to be restored. The people's reaction to the government's insults and dismissiveness did not cause the people to settle down to a simmer. On the contrary, it only further ignited the nation, increasing the brewing resentment, and causing the pot to boil over. Instead of people growing silent, they only got louder, planning more tea parties, resulting in the numbers in attendance increasing as 2009 unfolded as people because informed about the movement. The movement didn't die. It got bigger. The momentum gathered steam as people got more and more steamed at being ignored. To say the least, the government underestimated the people in a huge way. What a mistake!

Today marks the one year anniversary of America's second tea party. I can still remember seeing Rick Santelli's video on youtube, asking "President Obama, are you listening?". One year later, after so many tea parties across the nation, we still find that no one is listening. So, we are standing up again. There are tea parties today across the nation today, and more planned for tax day April 15th, Independence Day in July, and another march on washington on 9/12.

Last year there were 2 million that showed up for the 9/12 march. Imagine how many will be there this year, as the brewing resentment grows. We will not be silenced. We are patriots. We treasure our freedom. We will not be ignored. The fire ignited by our founding fathers still burns. And so I will doing my patriotic duty today and attending a tea party. As the founders declared, it is my right, it is my duty.

I will post a summary of the 2/27/10 tea party. In the meantime, here are exhibit photos from the Boston Tea Party in the Smithsonian. 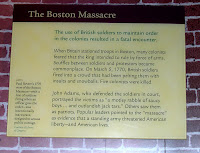 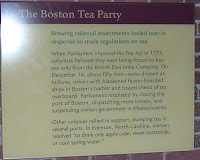 Posted by nyc conservative gal at 9:30 AM