Remember! Obama posed for the Socialist Newspaper as a Member

There seems to be quite a bit of discussion lately about whether or not Obama is a socialist. Should anyone have any doubts, please read the below information, refer the links, and look at the photos. Obama is a socialist, by definition, by actions, and by his own admission.

Just last night, pundits such as Bill O'Reilly were not only discussing this "question" as if it were an uncertainty, but he was toying with the definition of socialism. One can toy with semantics, but in the end it is the same result. The zebra doesn't change it's stripes and it is still a zebra regardless of which angle you look at it.

So let's start off with the definition of socialism. As per the Merriam-Webster dictionary:

Main Entry: so·cial·ism
Pronunciation: \ˈsō-shə-ˌli-zəm\
Function: noun
Date: 1837
1 : any of various economic and political theories advocating collective or governmental ownership and administration of the means of production and distribution of goods
2 a : a system of society or group living in which there is no private property b : a system or condition of society in which the means of production are owned and controlled by the state
3 : a stage of society in Marxist theory transitional between capitalism and communism and distinguished by unequal distribution of goods and pay according to work done

Obama's actions such as nationalizing banks, auto companies, and now healthcare, aggregating 56% of the private economy is not only significant, it is socialist. It falls right within the above definition. So does everything else, especially when you put them all together. State controlled is socialist. Cap and trade, controlling the amount of energy each person is allowed to use is socialist. Taxing the wealthy and giving it to the poor is socialist. The redistribution ideology is socialist. Unions and card check, promoting government control are socialist. I could go on but you get the point. These issues are about government control, which is socialist. We are not far from having our private property confiscated (i.e. gun control and attempts at confiscation).

Of course, the socialists know that they have a bad name. Obama and his cronies are socialists but they don't want you to know that. The DSA (Democratic Socialists of America) didn't want you to know that either. So in attempt to hide their stripes, the DSA proceeded to re-brand themselves. While a rose by any other name may still smell as sweet, a rotting corpse such as socialism still smells like a rotting corpse. So to re-brand, the DSA formed the "New Party" and set out full speed ahead with the same agenda. Obama is part of it all.

Barack Obama was endorsed by an organization known as the Chicago "New Party". The 'New Party' was a political party established by the Democratic Socialists of America (the DSA) to push forth the socialist principles of the DSA by focusing on winnable elections at a local level and spreading the Socialist movement upwards. The admittedly Socialist Organization experienced a moderate rise in numbers between 1995 and 1999. By 1999, however, the Socialist 'New Party' was essentially defunct after losing a supreme court challenge that ruled the organizations "fusion" reform platform as unconstitutional.

The "New Party" doesn't sound controversial at all, does it? They aren't even hiding. According to wikipedia:

The party could best be described as social democratic in orientation, although party statements almost invariably used the terms "small-d democratic" or "progressive" instead. Its founders chose the name "New Party" in an effort to strike a fresh tone, free of associations with dogmas and ideological debates.

While the New Party may have been rendered defunct by the courts, the agenda still exists and the members still pursue it, just under disguise. The zebra does not change it's stripes and the rotting corpse is still a rotting corpse.

So far, we have the definition proved real by Obama's own actions. Now for the self-admission part. Obama was a member of the New Party as per the above newsbusters report. But anyone can type and post anything. So I am now providing the visual. Not only was he a member and endorsed by the New Party, but he was mentioned in their newspaper. And just so you don't think this was another Barack Obama, his photo also appeared in the New Party newspaper in Spring 1996. Here are excerpts, as well as a couple of links so you can see the full details for yourself. I had initially read this on the wnd website, but thought I would include their source New Zeal as well, since it had more photos and full scans. 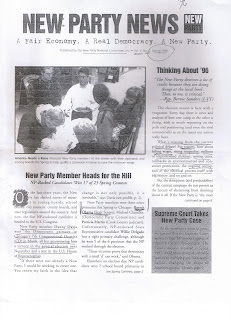 Now I think it is proven without a reasonable doubt that Obama is a socialist. As much as him, his cronies, the MSM, and all the pundits may try to deny it, dispute it, and dance around it, a picture is worth a thousand words. There is no question. There is no uncertainty. Obama is in fact a socialist.

Americans were asleep at the wheel when they elected Obama. America is starting to wake up. Americans cannot be Rip Van Winkle anymore and remain asleep. Those that are still asleep need to see this and wake up. Please share this blog post to enlighten America. Those who don't believe it need to wake up before it is too late.

Posted by nyc conservative gal at 8:30 AM